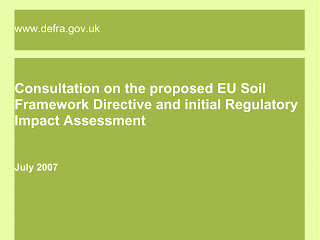 Defra and the devolved administrations are asking for your views on the proposed Framework Directive for Soils by 19th October 2007. I welcome the general thrust of the proposals that our soils require a higher level of protection than is currently afforded them under the current policies e.g SEA and CAP-cross compliance. Soil provides several critical ecosystem services that we benefit from directly and indirectly. Pressures on our soils are increasing due to economic development (e.g. housing, farming and tourism) and a changing climate. A proportional risk and precautionary based approach to managing our soils is required. We also need to be aware of the likely impacts and costs of any future policies. Kit.

'The European Commission adopted the Thematic Strategy for Soil Protection,
including proposals for a Framework Directive for Soils, in September 2006. The proposed Directive lays down a framework for the protection and sustainable use of soil based on the principles of integration of soil issues into other policies, preservation of soil functions within the context of sustainable use, prevention of threats to soil and mitigation of their effects, as well as restoration of degraded soils to a level of functionality consistent at least with the current and approved future use of the land.'

Purpose of consultation
'This consultation, issued jointly by Defra, the Scottish Executive and the Welsh Assembly Government, is designed to assist us in developing a robust negotiating position to enable us to engage effectively in negotiations. It is important that our negotiating line is well-informed and based on sound evidence. Hence, we are seeking your views on the scope of the proposed Directive and its approach, as well as on the benefits that the proposed Directive may deliver and the likely costs of implementing it.'

'In general terms, your views are sought on the following initial questions: