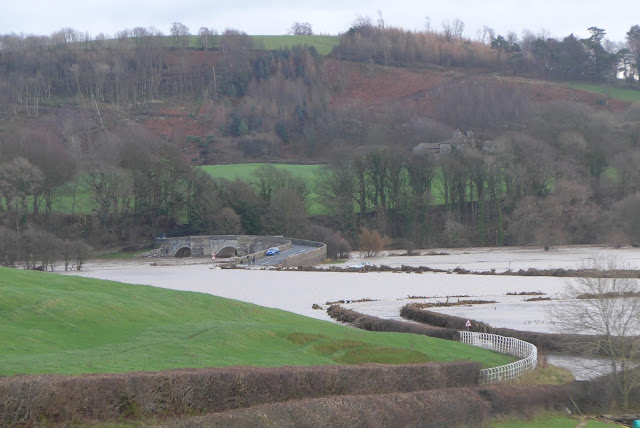 Apparently the Loyne Bridge, which bridges Gressingham and Hornby on the River Lune has been around since at least 1684, has been pronounced structurally unsafe.  Farewell Loyne Bridge for now, let's hope you get fixed pretty soon.

Here is a photo I took of Loyne Bridge on Sunday Morning after Storm Desmond had peaked.

My other photos of the morning after the night before around Docker, Whittington, Arkholme, Gressingham and Aughton are here, please share.

A Very Personal Reflection on Storm Desmond and Our Future

As I type this the tail end of Storm Desmond lashes the walls of my poor weatherbeaten 16th century cottage.  I have been arm waving about soil and water in lecture theatres for few years now in my job as a Professor of Soil and Water Science, but never has it felt so personal as my experiences yesterday.

It was a Saturday morning and we needed to drive my daughter 5 miles to the local town of Kirkby Lonsdale for her drama class.  It became a very complicated journey as we had to make detour after detour to avoid the floods.  When we eventually got 'home' we found that our local River Keer, normally a modest headwater ephemeral stream had blocked our access and we were forced to wade the final few m to our house.   I am quite a 'let's get on with it' person and I underestimated how stressful for this would be for my wife and children, specially because the flood water was fowled with cattle slurry and dirty water from our poor neighbour's flooded dairy.


After baths and drying off later that afternoon at dusk I had to pick my son up from work, normally a 5 mile journey in the other direction towards Carnforth.  Our 2nd car was still the home side of the river so we had options but it turned into a nailbiting experience.  We encountered road block after roadblock, rivers flowing across roads, it felt almost apocalyptic-like in the encroaching darkness. Thankfully, and I am amazed as I write this, we made it back, after a very round-about sort of route.  We were supposed to go to the Village Christmas Party only 2 miles away last night, it was not wise to try, the rain was still falling and my neighbour and I were both concerned that the Keer was going to burst its banks further downstream too.  We could not risk not getting home to the children.  So we hunkered down and looked after one another and tried to successfully divert the rampaging overland flow water from the back field.

So this morning things are calming and from my perspective we are lucky and relatively unscathed.  I cannot begin to feel the pain that others in Kendal or Keswick or elsewhere are going through, I am so sorry for you.  But even my modest experience was quite shocking and gave me a really personal insight about what is happening.  It makes my ITV television interview on Border TV on Monday seem strangely poignant.....

Sceptics question the role of climate change in all this but I have to say working with colleagues from the Met Office Hadley Centre on the changing behaviours of the rivers on the Eden and elsewhere I am reminded of what we know and what we can start to predict with albeit some (inevitable and healthy) uncertainty.  Analysis of the winter rainfall patterns in Newton Rigg, Penrith reveal an approximate 30% increase in winter precipitation since the 1960s to present.  This is not predicted and subjected to the whims and uncertainties in models, this is simply what has happened.  Looking ahead and working with the models, the best models that are available in the UK and in the world, the conservative predictions show that winter rainfall will rise by around another 15% by 2050.  So, as I reflected on twitter last night....


Say, if I were to live to 100, in my lifetime I would probably experience a c50% increase in winter rainfall. It's already increased by 30%
— Prof Phil Haygarth (@ProfPHaygarth) December 5, 2015


Don't you find this scary?

I did not realise that my words spoken to a TV crew on Monday would become so meaningful and personal to me just a few days later.   My 16th Century house and my neighbour's farm dairy were built in another time when we never expected the extremes or intensities that are now to be our future.  We need to accept this is how it is and how it will be and adapt.

Celebrating the International Year of #Soil #IYS and the start of the Soils Training Research Studentships (STARS) Centre for Doctoral Training #starsoil www.starsoil.org Recorded by the STARS PhD Students and their Supervisors at the welcome meeting for the first STARS cohort, Gregynog, Wales, November 2015
at 15:52 No comments: