500 days, a new Soil Map and hats off to Tim Harrod

Recently I had occasion to pass through my old stomping ground the beautiful south west of England and Devon where I had a meeting in Instowe near Bideford with my OPUS Team (pictures here), and after visit the South West of England Soils Discussion Group meeting at North Wyke.

It was terrific to refind my long term colleague and friend Dr Tim Harrod.  Tim used to work for the Soil Survey, he is one of the original soil mappers who mapped the nation and we had adjacent offices in Devon in the 1990s at North Wyke.  When he retired in the early noughties Tim was frustrated that he had never had funding to comple the soil map of the south west and so on his retirment ca. 10 years ago he made it is personal project to finish the map off his own will power.  He thinks it took hm about 500 days and it was a pleasure to see him launch the map at the meeting.  Here are all my photos of the SWESDG meeting.

Hats off to Tim! 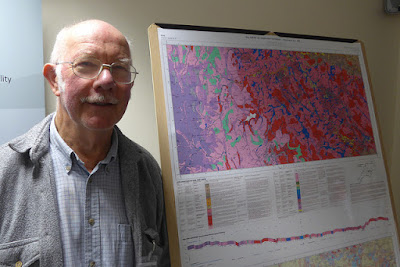