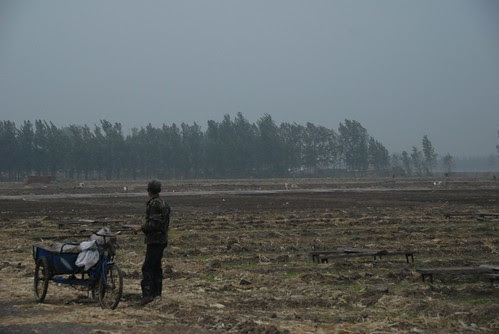 This visit was separated into four parts. Firstly, we met farmers and growers at a local village that was closely connected to an experimental station. We also met an agricultural entrepreneur who ran a corn and wheat processing company, and then we visit the institute itself and met officials from the Huantai Agricultural Bureau. Finally, when we were in Beijing on 16th we visited the west campus of the China Agriculture University (CAU) and spoke with Professors Wu and Meng, who were the academic leaders of the experiments. We were shown a useful presentation by Wu Lingfen who is an MSc student doing an N balance for Huantai County 1980-2012. Huantai county claims to be the most productive county in China (this seems to be a legitimate claim) and we were shown a film that promoted it in an extremely positive and production centric light, although there were some references to ‘mitigating’ non point source pollution that did not match with our analysis of things when we interviewed people. The rotations seem to plough in the straw stubble and consequently the soil organic matter is seemingly not declining and there are claims for it to have been actually increasing.

A few key learning outcomes for me were:

•The nitrate levels in the groundwater seemed to be approximately 3x the UK standard
•The water flows in this region are almost all to groundwater, so there is a sense of ‘out of sight, out of mind’.
•There was little real regard or concern for water quality
•According to the Agricultural Bureau, the water quality monitoring is the ‘job for the provisional government’ and that the information is ‘classified’. The bureau did not seem to be aware of any county level programme for protecting water resources.
•Generally there seems to be a nitrogen centric view here, phosphorus was little mentioned although it is used with N and K (in a bagged fertilizer NPK 15-15-15)

My photos from the trip to Huantai can be viewed here.