Video interview with Robert Chambers from IDS on Learning

Robert Chambers from the Institute of Development Studies (University of Sussex) is one of the pioneers of participatory approaches for sustainable agriculture and development. Interview done in Cali in April 2008, during the Learning Laboratory Meeting. Produced by Cristina Douthwaite.
at 15:17 No comments: 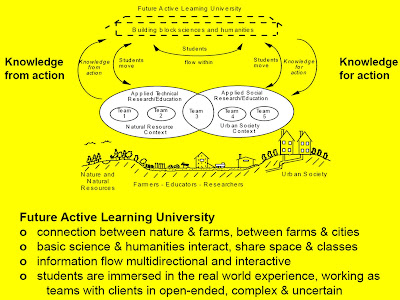 Charles Francis (Univ. of Nebraska) is a leading expert on improving learning for sustainable agriculture. In 2006 he gave University of Alberta Bentley Lecture on Sustainable Agriculture Lecture No. 4 Learning for the Future: Preparing for Complexity, Uncertainty, and Sustainability. In a recent paper in the Agronomy Journal (vol 100, issue 3, 2008; Transdisciplinary Research for a Sustainable Agriculture and Food Sector C. A. Francis,* G. Lieblein, T. A. Breland, L. Salomonsson, U. Geber, N. Sriskandarajah, and V. Langer) Charles et al., highlight their success with an Agroecology masters programme in Norway. 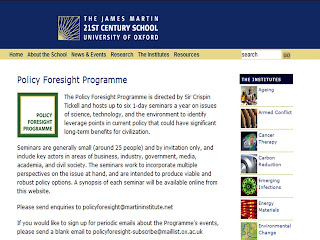 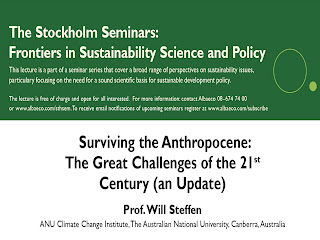 These are a fascinating set of seminars from leading experts. I have just watched Will Steffen's call for new approaches to science based on the complex problem's we face. Will makes a case for systems approaches that include participatory research, deal with scale in a fluid manner and use transdisciplinary teams. 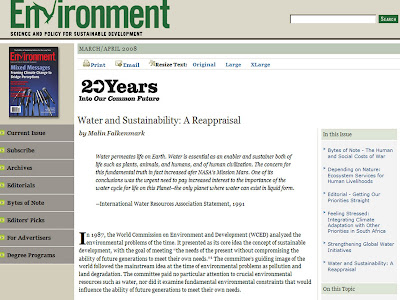 As part of a series of articles by leading experts, Malin Falkenmark reviews progress with water related sustainability. Highlighting the need for greater integration between management of land and water. "The series takes as a starting point the six common challenges identified in the original report: population and human resources, food security, species and ecosystems, energy, industry, and the urban challenge. Although the Brundtland report did not cover the challenges associated with water as a specific chapter, in recognition of water’s critical role in the welfare and health of our planet’s people and ecosystems, Environment has added an article to this series examining water’s role in sustainable development."

"Together, these four actions—population stabilization, seriously intended pollution abatement, water-based balancing of green and blue water requirements for social and environmental purposes, and preparedness for mega-scale food trade expansion from water-rich to water-short countries—will form the building blocks to a responsible approach to sustainability." 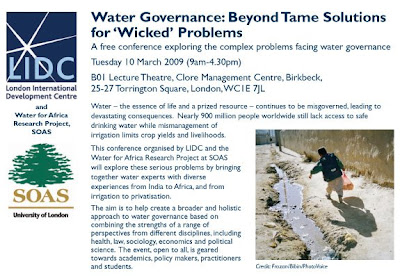